Freight transportation trend-watchers have seen this coming for a while, but a recent National Real Estate Investor article is the forecast writ large: As swathes of U.S. industry find themselves logistically constrained by congested highways, access to rail service is moving higher up the priority list of many manufacturers and distributors.

The freight rail industry has a unique opportunity to address and overcome the systemic  challenges that keep our immense contributions out of the spotlight and stifle significant capital investment waiting on the sidelines.  Click to watch the video and read the transcript of Michael Sussman’s powerful address at Railway Interchange 2019.

A new report by the Union of Concerned Scientists has confirmed a fact that is common knowledge to affected neighborhoods: communities of color in the Northeast and Mid-Atlantic regions are disproportionately exposed to air pollution from vehicles. The study, which utilized EPA and Census data, found that communities of color in those regions experience, on average, 66 percent more air pollution from cars, trucks, and buses than white communities.

This disparity is especially problematic because of its health implications. The type of pollution highlighted in this report, particulate matter smaller than 2.5 micrometers, has been linked to heart and lung disease, among other illnesses. It is responsible for most of the three to four million deaths that occur worldwide as a result of air pollution.

How did such a catastrophe happen? It comes from decades of policy at all government levels that placed highways in communities of color while refusing to provide them with public transportation. While we may not be able to remove the massive amount of infrastructure that is causing this problem, we must try to mitigate air pollution in other ways and encourage better policy for the future.

One of the report’s key suggestions was that “regional, state, and local governments must target actions to reduce emissions in overburdened communities.” We at OTNA are advocating one way of accomplishing this goal: making more efficient use of freight transportation methods. If we can be smarter about how we transport goods, we can reduce vehicle air pollution in these affected areas.

While we cannot make centuries of discrimination disappear overnight, we can and will do our part to lessen the burden of air pollution on these communities for future generations.

Place your hand on a steel rail after a 100-car train has just passed and feel the lack of heat. Friction is low when a hard steel wheel rolls over a hard steel rail. Consequently, the wheels last for hundreds of thousands of miles and the rail lasts for decades. Low friction means that hauling heavy weight and people over rails uses 1/2 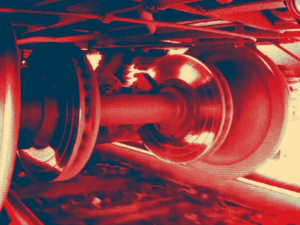 to 1/6 the amount of energy while producing fewer emissions than moving comparable weight over roads.

Overusing the wheel under single vehicle cars and trucks on rubber tires over rough concrete and asphalt wastes fuel, pollutes air, and diminishes available space. Apply the simple principles of friction efficiency to the task of moving heavy weight and people over land and we take a major step in the direction of creating a sustainable, resilient society.

Hyperloop transit, autonomous vehicles, and flying hotel pods are all exciting possibilities. But let’s not allow the spectacle of high-tech to blind us to the positive immediate impact that could be produced by intelligent use of a steel wheel rolling on a steel track.

Our landing page says it all: “Nothing is more important to our future than our use of the wheel.”