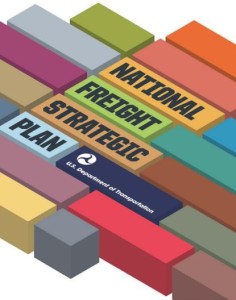 Submitted in 2015, the USDOT’s draft of a National Freight Strategic Plan invited public comment until April of 2016. Eighty-six comments later, the plan appears, here in early 2019, to have disappeared altogether. As a solemn marking of the third anniversary of the project’s last known activity, we’ll revisit  OTNA staff’s reading and commentary of the Plan. Were we overly critical? In review, we still don’t think so. Truth be told, it was barely a plan at all — really more of a report.

Our Analysis of the Draft National Freight Strategic Plan – 2016

The National Freight Strategic Plan (NFSP) aims to serve as an outline of key issues, but its lack of depth and overall passive orientation will not lead to meaningful progress. Increasing pressures from population growth and environmental degradation compel us to think more systemically and powerfully in advancing transportation’s vital role.

For issues as critical as freight transportation, we need to integrate well-meaning government efforts with intelligent private-sector business perspectives to create not just goals and visions, but action plans and commitments. As a matter of fact, if one were to consider a plan as a living document that includes specific measures, baselines, targets, accountabilities, commitments, and action steps, the National Freight Strategic Plan does not qualify as a “Plan.”

What we have come to accept as a “Plan”, including the NFSP, is more of a report on the past, plus trends and projections, and not a plan. In doing so, we abdicate responsibility for transportation system development to the commercial marketplace that is perfectly capable of creating individual projects, but not efficient systems. The entire NFSP relates to the future of goods movement as a pre-determined fate for which citizens must simply pay the economic, environmental, and social costs that the marketplace doesn’t include, because after all, everyone benefits.

This is not a strategy for national power and it is certainly not an approach that will deliver the urgent 21st-century policy goal of economic activity that supports sustainable growth and a higher quality of community life. OnTrackNorthAmerica is providing leadership on the three key developments that are critical to enhancing the NFSP’s contribution to achieving that goal. The first is to identify the full life-cycle costs and benefits of transportation investments at the individual project and systems’ level via OnTrackNorthAmerica’s Lifecycle Project. The second is to transform transportation reports and projections into Transportation Action Plans. The third is to implement a new innovative method for collective multi-stakeholder thinking, planning, and action, called IntelliConference.

So let’s dive into the NFSP to further illuminate the specific elements which need to be augmented or added.